Labor policies and the impact on housing

Recently, I was privileged to be a member of a roundtable conference in Canberra chaired by Treasurer Josh Frydenberg to discuss the implications of Laborâ€™s housing policy. The Treasurer said he had no specific agenda, and he had gathered together some of the most experienced property and finance people in the country to hear their candid views.

The material in this article is based on the opinions from the people who were present. The implications of the major changes proposed by Labor will depend almost entirely on the reaction of the home buying and investor public.

It would be an entirely different matter if we were discussing Laborâ€™s franked dividend policies because I could say with almost perfect certainty that I can predict exactly what strategies will be put in place by those who will be affected by them.

Since that roundtable conference, I have been coming to terms with what the proposed changes may mean to Australia. To be frank, Iâ€™m scared.

Labor is proposing a massive change to existing arrangements. First, by restricting negative gearing to new properties only, and second, effectively increasing capital gains tax by reducing the present 50% discount to 25%. They have announced these policies will be grandfathered, so they will only apply to assets acquired after a certain date (yet to be announced). Here is the statement taken from Laborâ€™s website. 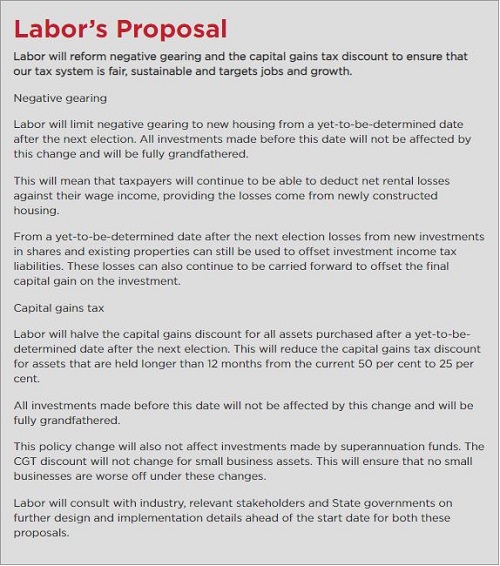 Laborâ€™s reasons for the changes to negative gearing are that investors enjoying tax concessions are competing with first-home buyers and thus driving up prices, making it more difficult for young people to acquire their first home. Reducing the tax concessions available to investors should cause demand to drop, and property prices to stabilise or even fall.

But given the increasing disparity between the average home and average weekly earnings, a fall in property prices might not do much for aspiring homebuyers. If a $500,000 property dropped 10% to $450,000, the buyer would still need a deposit of at least $45,000, plus the income to service a debt of around $420,000 when mortgage insurance is taken into account. Making homes more affordable for first-home buyers is extremely difficult, and many of the initiatives taken in the past have been self-defeating, as they have pushed up the price of housing by creating more buyers.

When I was in the building business in 1975, the average suburban low-set brick home in Brisbane cost around $30,000 and average earnings were about $15,000 a year. Currently, a suburban house in Brisbane costs around $500,000 which is about six times average earnings. So, housing affordability will continue to be an extremely difficult task and no party has a solution.

â€œThis policy will see a boost in new housing and will provide young families with the chance to find a home, and will take pressure off inner city housing markets that are predominantly made up of existing dwellings.â€

Whether or not this is true will depend on buyer behaviour. It may well be that millennials will prefer to rent in the inner city, rather than take on a large mortgage for a new home thatâ€™s a long way from the action.

Itâ€™s wrong to compare Laborâ€™s proposed changes to negative gearing with what Paul Keating introduced in July 1985 and repealed in September 1987. He increased the depreciation allowance to 4% for new construction and stipulated that losses on investment properties could not be written off against current taxable income, but would be quarantined to be offset against future income from the property when it became positively geared.

Under the current Labor proposals, as I understand them, losses cannot be offset against future taxable income, but will be added to the base cost to reduce capital gains tax on the property when it is eventually sold. Laborâ€™s proposals also apply only to new properties while Keatingâ€™s applied to all properties.

Expect much debate on these policies in the next three months. Labor is using a 2016 report from the Grattan Institute to support its case. It concluded:

â€œUltimately, people who invest in property take into account a host of factors, including rental returns, risk perception, familiarity with the asset class, and ability to obtain bank finance. Modest changes in tax treatment will not affect their decisions much.â€

In contrast, a report commissioned by Master Builders Australia, prepared by Cadence Economics, has forecast a decline in new home building of between 10,000 and 40,000 dwellings, and a loss of 7,500 to 32,000 full-time construction jobs. Master Builders tell me itâ€™s not the abolition of negative gearing per se that will cause a slump, but the combination of the new negative gearing and capital gains tax rules.

Back in 1985, when the Keating changes were in the news, I did several roadshows with a leading chartered accountant. We had conflicting views. My modelling demonstrated that the Keating proposals werenâ€™t really too tough and should not put anybody off acquiring investment property. The accountantâ€™s view was that perception, rather than facts, would resonate with the public and they would desert investment property in droves. His view proved to be correct.

The distinction between new and established properties could have some serious consequences. Think about an investor couple who decide to buy a $500,000 new investment property. They sign the contract and apply for finance. The bankâ€™s valuer does the valuation based on a forced sale of what would then have become an established property. Valuers tell me this could reduce the valuation down to $450,000 and the application for finance may be rejected. If the buyer canâ€™t get finance, the contract will be cancelled, and there may be one less property available to be rented.

If the negative gearing rules are changed, it would make more sense to include all properties, as Keating did. After all, the majority of tax deductions that relate to investment property come from brand-new properties.

Political parties of all persuasions should understand some fundamental truths about the property market. There are many investors who are terrified of shares, and are wary of superannuation because of the continual rule changes. They use borrowing for residential property as their means of saving for retirement. This is a double win for Australia. It provides an ongoing supply of rental property, reducing pressure on rents, and enables hundreds of thousands of Australians to become self-funded retirees with no expectation of help from the government.

What does the future hold? Itâ€™s anybodyâ€™s guess, but we do know the election will be in May 2019, and the result may be a narrow win for Labor. If this happens, expect months of negotiating with the minority parties to pass these changes. This will create uncertainty, which may well mean that homebuyers will sit on their hands waiting to see what laws will be changed and how.

Labor has promised that their capital gains tax increases will affect only assets acquired after a specific date in the future, which is yet to be announced. Once it is announced, expect a flurry of buying in both property and shares, as buyers jump in before the tax rules change.

If this happens, it is highly likely to be followed by a significant slump in activity after the change date, because many people who could buy would have bought.

The housing market is already down

The big question now is whether such radical property changes should be contemplated at a time when the market is in a slump with strong indications that it may get worse.

â€œ â€¦ the housing market downturn is now more widespread geographically and we arenâ€™t seeing any indicators pointing to the market bottoming out just yet.â€

Furthermore, according to the Australian Bureau of Statistics, Australiaâ€™s construction sector has moved sharply into reverse. Private surveys run by groups such as the Australian Industry Group and the Housing Industry Association have reported home building activity to be at its lowest ebb in six years. The construction industry is one of the biggest employers in the country accounting for 989,400 full-time jobs during the three months to November 2018. If the residential market continues to slump, the loss of jobs could be catastrophic.

Itâ€™s a great discussion to have with the family around the dinner table. The certainties are that Australiaâ€™s population will keep growing, property will stay out of reach for many renters, and builders wonâ€™t build to sell at a loss.

Noel Whittaker is the author of Making Money Made Simple and numerous other books on personal finance, which can be found on his website noelwhittaker.com.au. This article is for general information purposes only and does not consider the circumstances of any investor.