This is why housing is more affordable now than in 1990

Is there really a housing affordability crisis?

Now I’m not arguing that it’s hard to get into the housing market – it is, but maybe it’s no harder than before.

According to the Property Investment Professionals of Australia (PIPA) those arguing property’s lack of affordability haven’t studied the numbers properly.

“This is a good measure to indicate how expensive housing is, but if you want to analyse affordability, you must also consider mortgage repayments.”

PIPA examined annual figures looking at the average size of a home loan, the standard variable rate, principal and interest loan repayments and the annual average wage from 1990 to today. 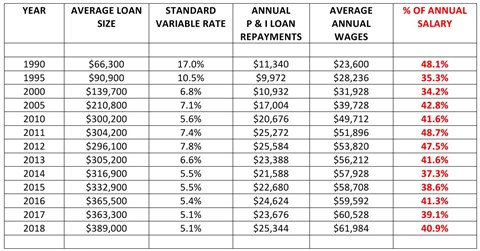 “The key figure to look at is the last column â€“ the percentage of an average person’s income needed to make the mortgage repayments,” Mr Koulizos said.

Mr Koulizos noted that, based on this realistic analysis, home loans are as affordable now as they were in 2010, and actually more affordable than 28 years ago.

“Compared to 1990 when you needed 48.1 per cent of the average annual salary, property owners are in a better position.”

He said interest rates played a major role in driving affordability, and our current low-rate environment was keeping property price-accessible.

Mr Koulizos said that in 1990, when home loan interest rates were 17 per cent, it required 48.1 per cent of the average person’s salary to make the mortgage repayments.

Five years later, you only needed 35.3 per cent of the average salary to make the mortgage repayments.

“Why such an improvement in affordability in such a short period of time? It’s due mainly to markedly lower interest rates in 1995 as compared to 1990.”

Mr Koulizos said that, rather than the ability to service a loan, it was the initial deposit that seems to stump most potential first buyers.

“There’s little doubt it can be tough saving for a deposit, although many first-timers are using innovative strategies such as rentvesting and buying in more affordable locations, as well as buying with family and friends to get a foot on the real estate ladder.”

Mr Koulizos suggested buyers need to ensure they are relying on expert advice from a qualified property investment professional as well as seeking the best possible finance deal.

“Shop around and use a reputable mortgage broker and professional property investment advisor,” he said.